What does it take to create a “typical” video shoot? No project is really “typical” but there is some consistency in how we approach our projects at Emotivo Productions. I was recently hired by a producer in California by the name of Harley Rinzler to do four promotional videos for a yoga teacher with over 30 years of experience in Troy, NY. Her name is Lauren Toolin and she’s very well known in the health and wellness circles in New York’s Capital Region. While every shoot is unique in some ways, I wanted to share with you what it takes to do a series of structured videos from beginning to end.

Since the producer was not on the east coast, he asked if I could help him find a few options for a location that would match the yogi feel he was looking to convey. I dove into my local resources and was able to get a hold of two feasible options that might work for this project. I think I may have spent about an hour talking to my two possibilities, coordinating pictures and videos and sending all this information back to California. In the end, the producer decided that we should use Lauren’s home as our location of choice.

I spent about another hour at Lauren Toolin’s home taking a look at where to place the camera, the conditions of the light, how noisy or quiet the place was and rearranging furniture to find the best angle possible. We eventually found a section of her home we all liked.

I was given a budget and found the necessary crew to make this video a success. The producer and I decided that this would be a two camera shoot and we would also hire a hair and makeup professional. I went with one of my trusted camera operators in the area, Ken Kozak of Kendo Media, and with Antoinette DiMascio for Hair and Makeup. Since I have worked many times with Ken and I knew Antoinette from before, this only took about 30 minutes. It pays to already have contacts in the area!

I’ve been through the process of prepping my equipment for a shoot hundreds and hundreds of times, so I’ve got it down to an efficient routine. I took about an hour to check everything off the list. Camera, lenses and tripods have to be checked. Batteries have to be charged. Light sources, cables, ballasts, microphones, stands, sandbags and extra grip equipment have to be selected and loaded into my vehicle. I must have all the equipment I think I might use plus account for any unpredictable occurrences, so I usually bring a little extra of everything. These are some of the more not so glamorous things needed for a shoot to go as planned, but they have to be done and are essential.

We arrived 15 minutes before the start of the shoot and proceeded to load all the equipment into Lauren’s apartment on a second floor. While Ken and I load in and begin our camera setups, Antoinette begins to do Lauren’s hair and makeup. Setup took about an hour and 45 minutes to complete. Once Lauren was ready to go, we had her stand in for final light and sound checks. We linked Harley in to direct the shoot via an iPad and we were ready to go.

Lauren was a true professional! She memorized all her lines. I assumed she was going to have a general idea of what she was going to talk about and then speak from the wealth of knowledge she possesses, but I was mistaken. She spent countless hours in the days leading up to the shoot learning four scripts by heart. I think very few people realize how hard it is to deliver a cohesive and engaging message to a camera all the while keeping a pleasant and inviting attitude. It’s tough work, and Lauren delivered. She did great!

All in all, it took about two hours to film four short scripts. Both Harley and Lauren were very happy with what they both were able to give to the camera and Ken and I were very proud of how everything looked and sounded. We wrapped our shoot, took down the equipment, and we were out of Lauren’s home in about 30 minutes.

This is where the magic happens and my favorite part of the process! Lauren, understandably, did a few takes for each video. She delivered great performances but every take was a bit different and there were some minor mistakes here and there. It was my job to go through all the footage (about 90 minutes worth) and wheedle it down to what became our final product. I spent close to six hours over a couple of days on the edit. After Harley was satisfied with the pace and flow of each of the four videos, I proceeded to do color correction and sound mix on each. Harley approved all four videos and I sent him the final versions. Our project was complete. 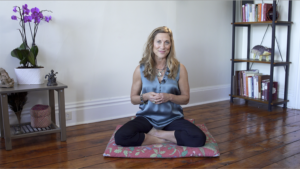 From beginning to end, this project took close to 14 hours of my time. Fourteen hours and the work of five separate individuals to produce 4 videos with a total run time of nine minutes!

It’s so cool and humbling to realize all the work, time, energy and resources it takes to produce something that looks so “simple”. Well produced and well shot, yes, but relatively simple. And by simple, I mean it in the most positive definition of the word possible – clean, smooth, uncomplicated and not needlessly elaborate-looking.

A good promotional video of this kind should be simple. You shouldn’t be distracted from the message. Your attention should be focused on the presenter and the information she/he is conveying. If while watching a video of this type (an introductory, call-to-action type of video)  the viewer is thinking about the color of the wall or the way the light is framing her face, we didn’t do our jobs well. Good filmmaking should be invisible. Good filmmaking allows the viewer to get lost in the story or message that’s being shared. It’s hard to accomplish that successfully and a lot of work goes into making any type of well-produced video.

I hope this article helps you admire and appreciate a tiny bit more any type of media you consume, but especially a piece of art that speaks to you. It took its creator/creators dozens, hundreds, sometimes thousands of hours to distill it to the final form you are consuming. It’s a magnificent achievement and we are all better for it.

If you want to hire Emotivo Production to produce your next project, you can reach us at info@emotivoproductions.com.